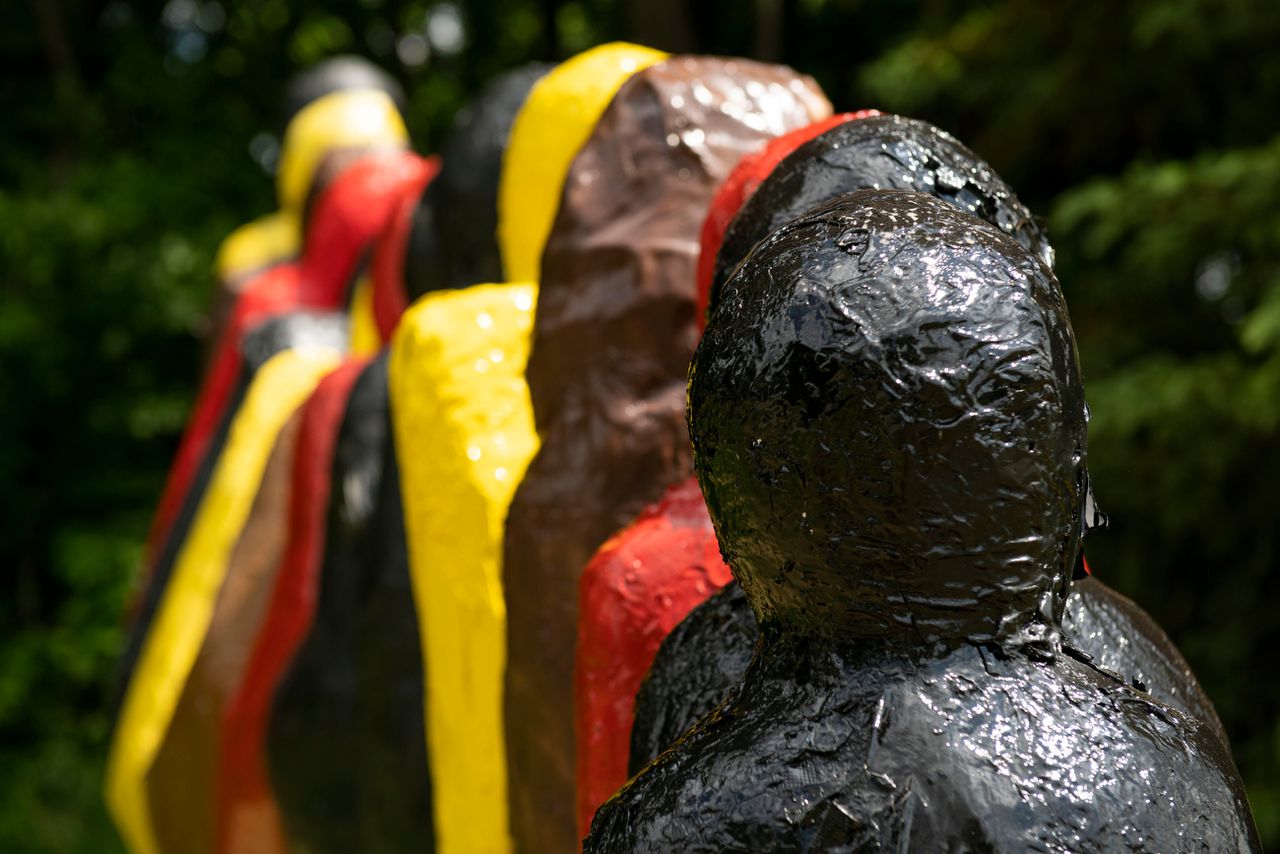 SCIO TWP., MI – Late Friday afternoon Jarrad Lawlor returned to work to find a colorful change to the white statues hugging the tree line outside his office. Soon after, he decided to finish the paint job.

The Ann Arbor resident is a financial or accounting controller for Mager Scientific, a distributor of metallographic equipment located at 1100 Baker Road in Scio Township, near the Dexter town border.

Back at the office after 3 p.m., five of the sculptures sported a new look. Two were black, while one was painted red, brown and yellow.

That day was June 19, or the 155th anniversary of America’s emancipation from black slaves after the Civil War, a fact Lawlor had in mind as he prepared to complete the work of the unknown painter.

“I have no idea who did this, but I had a pretty good idea why,” he said in a shared Google document. “The fact that it was June 15, the colors used and the general political climate of the nation were not lost on me. “

With the statue standing on private property, Lawlor feared the painter could face vandalism charges if discovered by police adding more color later. Since “no one should risk getting in trouble with the police,” he said, the afternoon was spent buying red, black, brown and yellow paint and taking risks. himself.

“The experience was a bit surreal,” he said. “There was a lot of traffic on Baker Road at 4 pm. Many people honked and shouted in support. A family watched me paint for an hour across the street and told me they “wanted to see history made”. The police stopped to make sure everything was okay and to determine that I was not vandalizing the statue.

The statues were originally sculpted by Ronald Farrington Sharp and were purchased by Mager Scientific in 1991, according to Lawlor. Sharp called the piece “La Raza,” a Spanish word for “race” or “community,” which he said is embedded in the artistic sense of the sculpture.

“The original meaning of the work was to represent the power of groups of people to create change, from young to old, of all sizes and races,” said Sharp. “I think the painting of it makes that message clearer, so I don’t object to it.”

More Sharp art can be found here. He also has a room called “Inner Conflict” in the alley opposite the Dexter Bakery, 8101 Main St.

Politicians in the area have expressed approval for Lawlor and the colorful addition of unknown painters to Sharp’s work, including Dexter Mayor Shawn Keough, who called it a “positive story about our community,” although ‘it is located just outside of town.

Scio Township Clerk Jessica Flintoft appreciated Lawlor’s commitment as a key employee of a company to make the statement his work has made in support of racial equity and representation.

“I support creative expressions of unity and community,” she said. “I appreciate that a representative of the company got creative … someone who takes responsibility for the symbols on their property. “

Lawlor knows that not everyone who walks past the repainted statue will support what he did, but he insists he wasn’t “looking for notoriety, not for trouble.”

“I was presented with a situation and I responded in the best possible way,” he said. “I would love nothing more than to return to work on Monday and resume the previously scheduled crisis of the company’s navigation through the global pandemic.”