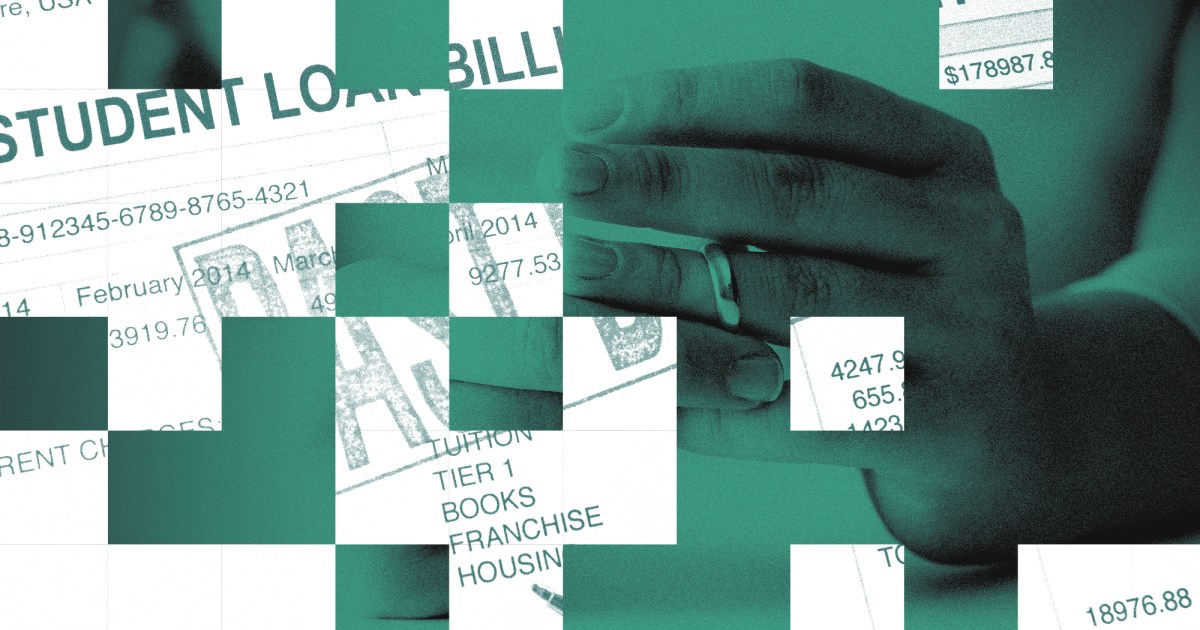 She accused her ex-husband of abuse. She’s still stuck with her student loans. –Mother Jones

When Michelle and her husband divorced, a judge separated their assets. She got the televisions. He got the gas grill and freezer. Most of their debts were divided and, in many cases, divided equally between the two.

But one debt proved more difficult to separate: their student loans. When they got married, they had combined their existing college debt into what is called a spousal consolidation loan. This obscure financial product, which was first made available in 1993 by an act of Congress and pulled from the market in 2006, allowed married couples to turn their separate student loans into a single, shared liability.

“The pitch was really, you know, ‘It’ll lower your payments,'” Michelle recalled.

But spousal consolidation loans have a catch: there is no mechanism to separate loans from two borrowers, even after the breakdown of a marriage. That’s what happened to Michelle, who, according to a complaint she filed in court, had been repeatedly beaten by her then-husband. After he allegedly verbally abused her and threatened to hit her again, Michelle obtained a protective order against him and filed for divorce. In a legal filing, Michelle’s husband denied the abuse allegations.

Michelle, whose name has been changed in this article, was eventually able to get a divorce, but the loans remained consolidated and would become a tie to a relationship she had tried so hard to leave.

The number of people in situations like Michelle’s is relatively small. Mother Jones previously reported that there are only 776 borrowers with spousal consolidation loans that are still in repayment or expected to be repaid in the future – a small fraction of the 45 million borrowers with student debt. Not all of those 776 borrowers are divorced, but many report problems accessing debt relief initiatives like the federal program that forgives loans for those employed in public service-oriented jobs. For those who are divorced, however, and especially for borrowers who have been through abusive marriages, these loans can present particularly painful challenges.

“It was a very unique product that was created, and the fact that you can’t separate them – I don’t know of any other product designed in this way,” says Persis Yu, director of policy at Student Borrower Protection. Center. “They stopped making these loans in 2006, so they are really old loans at this point.”

Because the law that created spousal consolidation loans leaves both borrowers responsible for all debt even after a divorce, ex-spouses must “work together to make payments,” Yu notes. is a very big problem with these loans. These loans can actually put victims of domestic violence in a very precarious situation. »

Michelle says consolidated debt became a way for her ex-husband to continue to exercise control over his life. The divorce decree stated that Michelle would be responsible for the loans she had accumulated for her studies before the consolidation, while the ex-husband would be responsible for the loans he had accumulated. But legally, the loans remained a single debt with a single monthly bill, and making the payments became a point of contention. Since Michelle was worried about the impact of overdue debt on her credit rating and on her career, she felt compelled to keep up to date with the payments. But to do that, she needed to interact with her ex-husband.

Michelle’s ex only made part of the payments, she says Mother Jones. “I would call him and say, ‘Hey, the loan repayment is due. I have to go through and receive payment,” she said. Occasionally, her ex-husband would give her a check or money order. Other times, Michelle says, he made no payment. “Most of the time I tried to call, he didn’t answer. I was trying to text, he wasn’t responding. In a legal filing, Michelle’s attorneys alleged that the ex-husband stopped paying altogether from 2017 and in total only contributed about $1,600 to the loan after the divorce, while that Michelle had paid over $60,000. In his own filing, Michelle’s ex denied the allegations and claimed he paid his share of the debt.

Eventually, Michelle came to see the lack of cooperation as a continuation of the abuse she says she suffered during her marriage. “I realized over the past two years that this was a way for him to abuse, because he always had the cards in hand,” she says. At times, her ex-husband denied ever having student debt in the first place.

Another borrower, Catherine, said Mother Jones that its consolidated student loans also posed a significant challenge. (Catherine’s name, like Michelle’s, has been changed for this article.) Catherine ended her marriage after learning that an investigation was underway against her ex-husband for producing child pornography. He eventually pleaded guilty and is currently serving a long prison sentence.

During the marriage, Catherine says, her ex-husband controlled their finances and consolidated the couple’s student loans. He also ran up large debts for unpaid federal taxes during and after their marriage, according to tax liens reviewed by Mother Jones. When they got married, Catherine and her ex-husband had filed jointly, meaning Catherine was held jointly and severally liable for her ex-husband’s tax bills. For taxes, Catherine said she was able to get relief through the IRS Innocent Spouse Assistance Program, which eventually freed her from a significant portion of that debt. In contrast, there is no similar program for spousal consolidation loans and no method for separating debts.

“I’m paying this debt from the person who…hurt me.”

Currently, Catherine says, she makes monthly student loan payments for her and her ex-husband’s. The Biden administration’s student loan payment pause did not apply to her, she says, because of the type of loan she has. Catherine repays the loans under an income-tested repayment plan, which requires her to certify her income each year. And despite her loan officer allowing her to do so without providing information about her ex, Catherine found the process traumatic.

“It’s emotionally overwhelming every time,” Catherine says. “Every year when I have to go through income-based repayment, I have to tell my story…to the loan officer because he doesn’t read the notes. And so I have to go through all the spiel that my ex has nothing to sign, I don’t have to give you my ex’s income.

“It’s just so emotional to have to go through that every year,” Catherine adds, “knowing that I’m paying this debt to the person who…hurt me.”

There is bipartisanship legislation in Congress that would allow spousal consolidation loans to be segregated based on the proportion originally owned by each borrower. A spokesperson for Sen. Mark Warner (D-Va.) said Mother Jones that he and other co-sponsors “are actively engaged in conversations with our colleagues and are hopeful that we can soon move the bill forward toward its long-awaited passage.” Catherine, who is employed in the civil service, says the measure could be life-changing as it could allow her to clear her debts under the civil service loan forgiveness scheme.

Separating consolidated loans isn’t always as simple as dividing them by who originally borrowed how much, especially for people like Michelle, who says she made more payments than her ex-husband. “I have no idea how they would go about separating them,” Michelle says.

Still, Michelle says separating the loans would offer her significant relief, both because she wouldn’t have to interact with her ex-husband and because it could make it easier for the government to cancel the loans. “Every time I have to make a payment every month, it reminds me that I’ve been abused,” she says. “I fought to get out of it. And I’m still tied to that.

How to optimize your savings and prepare for your retirement

9 best shopping apps to save money